What is a removal certificate?

Sample transcript of a removal certificate

Go to the Removal Records Index to browse these records. Each record lists all the names that were mentioned in the document, provides an explanation of the event, and links to an image of the archival source.

What is a removal certificate?

Historians have documented abuses of the removal registration system by legal officials and slave traders who participated in the interstate slave traffic. In some cases, Black people were coerced or told lies about their destination so that they would say “yes” when the judges asked about their consent. In other cases, the enslaved individuals were not examined by the judges at all, and the certificates were falsified after the person was already on their way to a slave ship bound for some southern state.

One of the most notorious cases of abuse took place in Middlesex County where a corrupt judge named Jacob Van Wickle took advantage of his position to establish a slave trading ring. Jacob Van Wickle's son Nicholas Van Wickle and brother-in-law Charles Morgan were involved in a scheme to buy groups of enslaved people in New Jersey at cheap prices and send them to the Deep South to make huge profits. Judges John Outcalt and John Smith colluded with Van Wickle to sign removal certificates under shady circumstances. You can browse the profiles of Van Wickle and 13 associates who are mentioned in the removal certificates.

In 1818, Jacob Van Wickle signed removal certificates for 77 people, authorizing his own son, brother-in-law, and other associates who were part of the scheme to remove Black men, women, and children from New Jersey to Louisiana and Mississippi. But these Black people did not actually give their consent and were instead coerced to leave New Jersey with the slave traders or else left the state under false pretenses after being lied to about their destination.

At least 12 Black mothers were forced to leave New Jersey with their young children as part of Van Wickle’s operation. Additionally, 17 children were sold down south without parental consent, with the removal certificates simply stating that the minor had no mother or father who could provide consent. At least 15 of the children taken from New Jersey had the status of a “slave for a term,” meaning that they were eligible for eventual emancipation under the gradual abolition law, and moving to the Deep South through Van Wickle’s machinations deprived these children of the promise of freedom. The Middlesex County removal certificates also show that 2 free Black people were taken to Louisiana to labor in bondage. These special cases can be identified in the Removal Records Index using the “Group by keyword” feature on the left side of the page.

The Lost Souls Memorial Project in East Brunswick seeks to memorialize the the individuals whose freedom was stolen by Van Wickle's slave trading ring. Researchers working with the project have documented over a hundred victims who were taken away from their communities in New Jersey, including additional individuals who do not appear in Middlesex County removal certificates. Visit the Lost Souls Memorial Project website to learn more about this story and the efforts to memorialize the victims of the interstate slave trade in New Jersey. 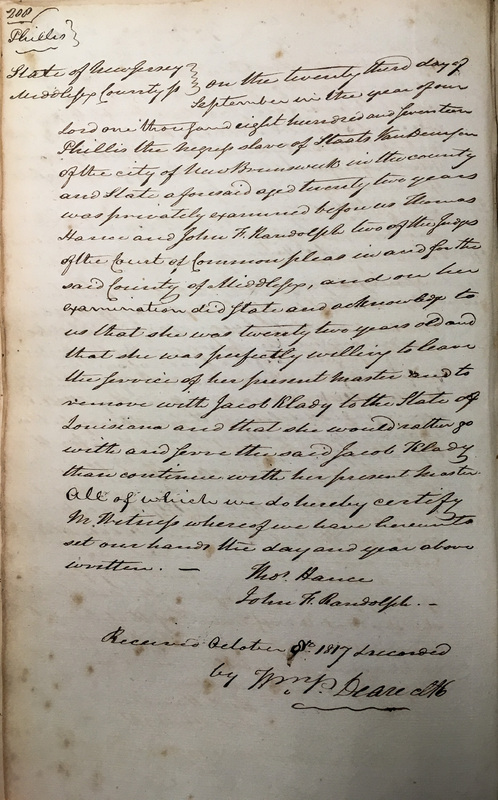 Sample transcript of a removal certificate

Phillis }
State of New Jersey }
Middlesex County }
On the 23rd day of September in the year of our Lord one thousand eight hundred and seventeen Phillis the negro slave of Staats Van Deursen of the city of New Brunswick, in the county and State aforesaid, aged twenty two years was privately examined before us Thomas Hance and John F. Randolph two of the Judges of the Court of Common Pleas in and for said County of Middlesex, and on her examination did state and acknowledge to us that she was twenty two years old and that she was perfectly willing to leave the service of her present master and to remove with Jacob Klady to the State of Louisiana and that she would rather go with and serve the said Jacob Klady than continue with her present master. All of which we do hereby certify. In Witness whereof we have hereunto set our hands the day and year above written. -
Thos. Hance
John F. Randolph. -
Received October 8th, 1817 recorded
by Wm. P. Deare CLK